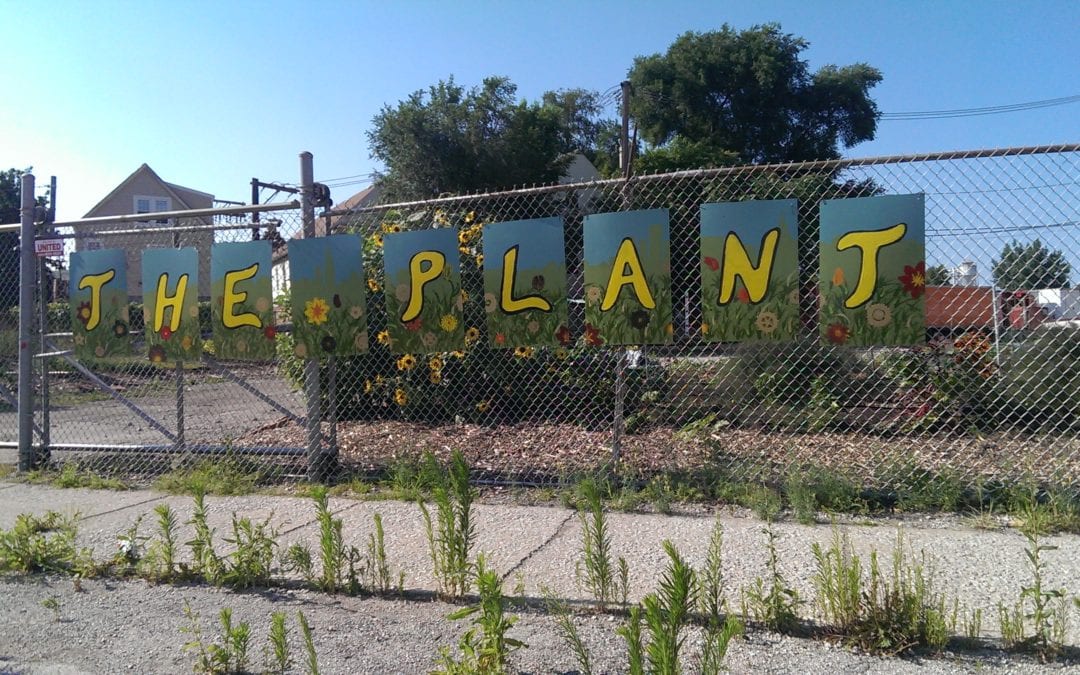 Over the last week, I’ve been exploring urban agriculture applications and have been delighted to discover that there’s actually some really cutting edge stuff going on in Chicago, some people really pushing the envelope. It’s a really interesting dichotomy because your average Chicagoan’s consciousness pales in comparison to your average Portlandian (for instance), yet there is still some really cool stuff going on in our fair city.

Last Saturday, I spent a day volunteering at The Plant. This place is located in the Back of the Yards neighborhood- Southside of Chicago in the heart of a food desert where there is no access to fresh produce. It was built in the 1920s and has served as a ham packing facility until a few short years ago. It’s currently being transformed into a net zero energy system that will serve as a local food steward creating jobs, feeding people real food and revitalizing the economy of the neighborhood. The Plant is currently under deconstruction and reconstruction from the inside out. There are currently some tenants in the building including organizations that are doing aquaponics, vermicomposting, vertical farming, outdoor urban farming, rooftop gardens, mushroom cultivation, a specialized bakery and Kombucha brewer. There are two breweries and a cheese distributor slotted to join in on the ecosystem. Furthermore, The Plant is building an industrial community kitchen that can be rented as needed as well as office space for the tenants to be able to run their businesses professionally. They are also a hub for the Food Truck Community and there will be a Food Truck Rally this coming Saturday. 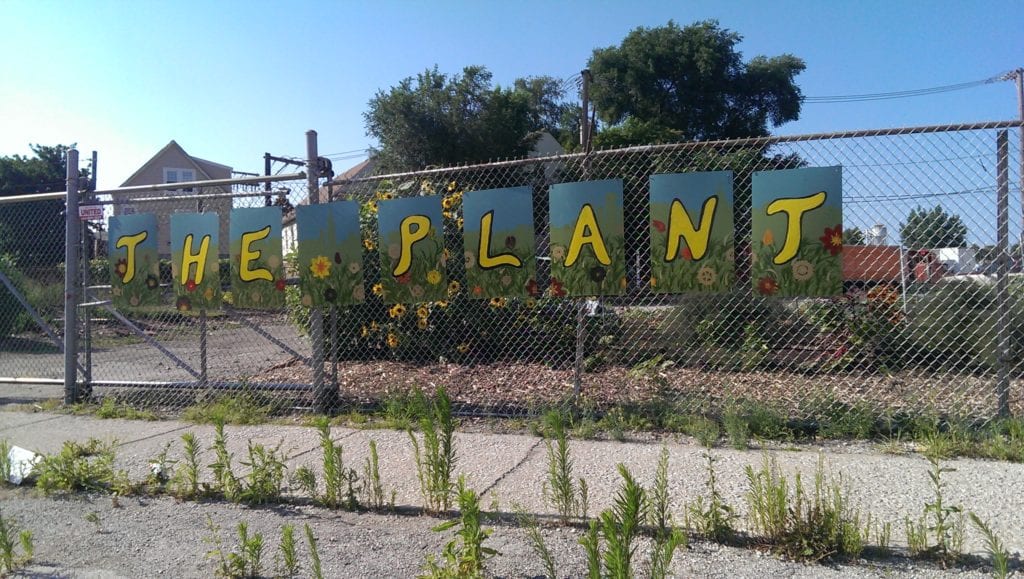 The best part, all the food waste from the tenants and neighbors is going to go through an anaerobic digester which produces gas from methane. This gas can then in turn be used to heat the building and turn a turbine which will produce electricity, enabling the whole deal to operate off the grid. They have estimated they will actually end up producing excess energy and their meter is going to run backwards, the energy company is going to owe The Plant money once everything is swinging. They’re transforming this old factory into a vibrant community ecosystem that solves social, environmental and economic problems in a sustainable fashion. If you’re in Chicago, you’ve got to go and see this place for yourself. They’ve got tours every Thursday, Friday and Saturday that go through the facility and explain everything that is going on and what’s still on the way. The Plant is an excellent example of how even urban dwellers can live in harmony with the planet and close the loops. They’re creating a community ecosystem where each problem is a hidden solution. Being in the city, they were forced to get creative and design on top of existing, outdated infrastructure. This is a challenging task, but it can clearly be done beautifully. I’m inspired and encouraged by this example and hope to continue learning more from the generous folks at The Plant. 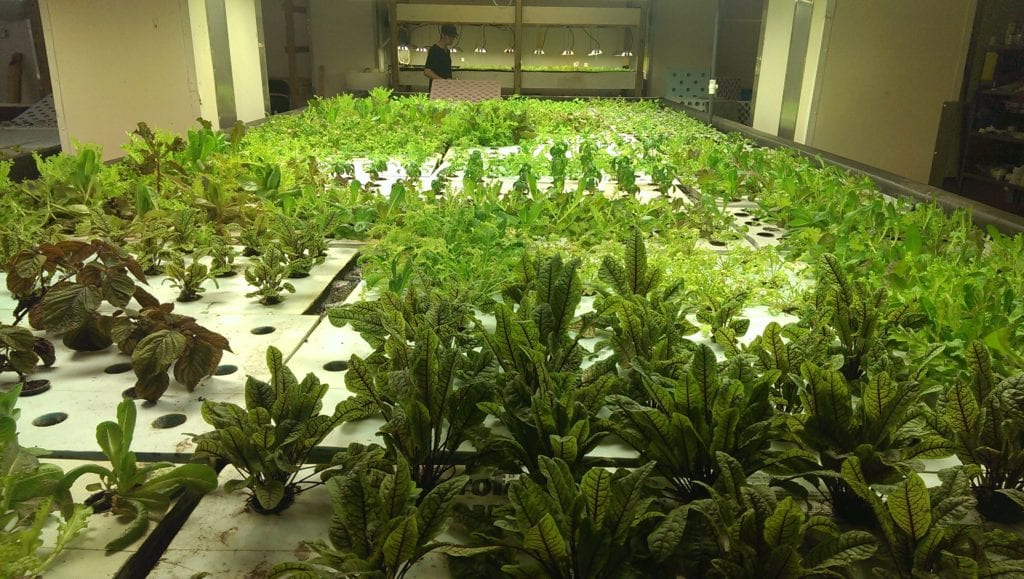 I also went and spent some time at the Iron Street Farm, which is supported by Growing Power in the Bridgeport neighborhood of Southside Chicago. Driving up to this place was so bizarre, it’s situated in this industrial park and there’s huge semis driving around and little old me cruising down the alley in a minivan, wondering if I’m lost or what. Sure enough, the place is there and it’s remarkable how the space has been transformed. It spent ten years as a vacant space and now it’s this highly productive place that creates opportunities for kids in the community to get involved and stay out of gangs and other bad things. 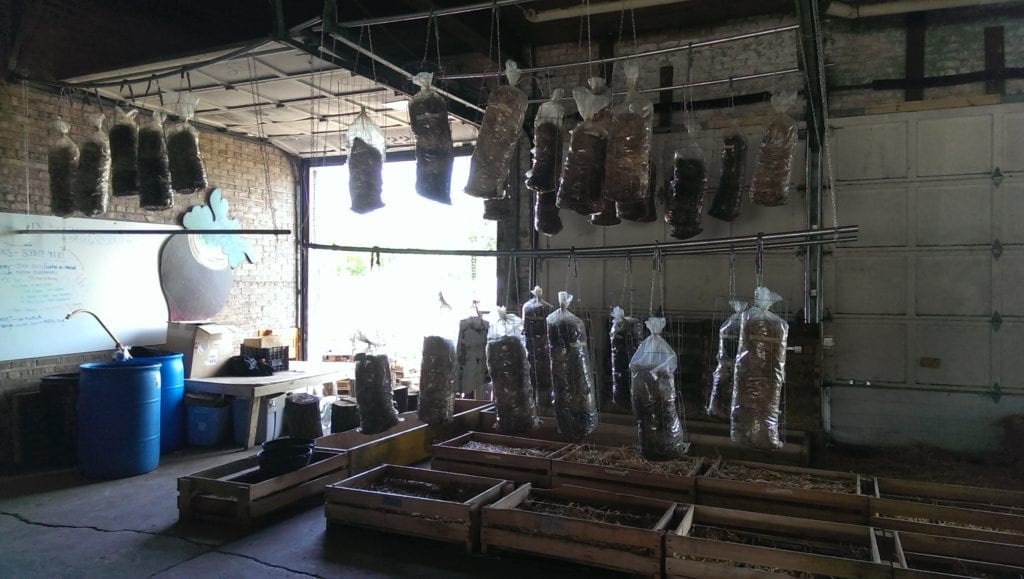 This place has vermicomposting, an aquaponics sytem, hoop style green houses, a 90′ long food waste compost heap, mushroom cultivation and they grow food sold in farmers markets. The food is grown on top of what used to be a concrete lot that has been retrofitted with woodchips and has garden beds made from the rich compost being created onsite all enclosed in hoop houses enabling year-round production. The sale of this produce, worm castings and mushrooms is how the organization funds itself. They also get food waste shipments from a distributor who can no longer legally sell food that is nearing expiration. This ageing food waste is diverted from a landfill and used in the giant compost heap. I just happened to be there when a shipment came in so I got to help unload the truck and transport the produce to the compost heap via wheelbarrow. It’s sick how much food we waste as a society. Globally, it adds up to about 1.3 billion pounds of food, that’s one-third of all global food production. We definitely don’t have a food production problem, but there is a serious consumption and distribution problem. Here, we throw food away while children starve to death all over the developing world. 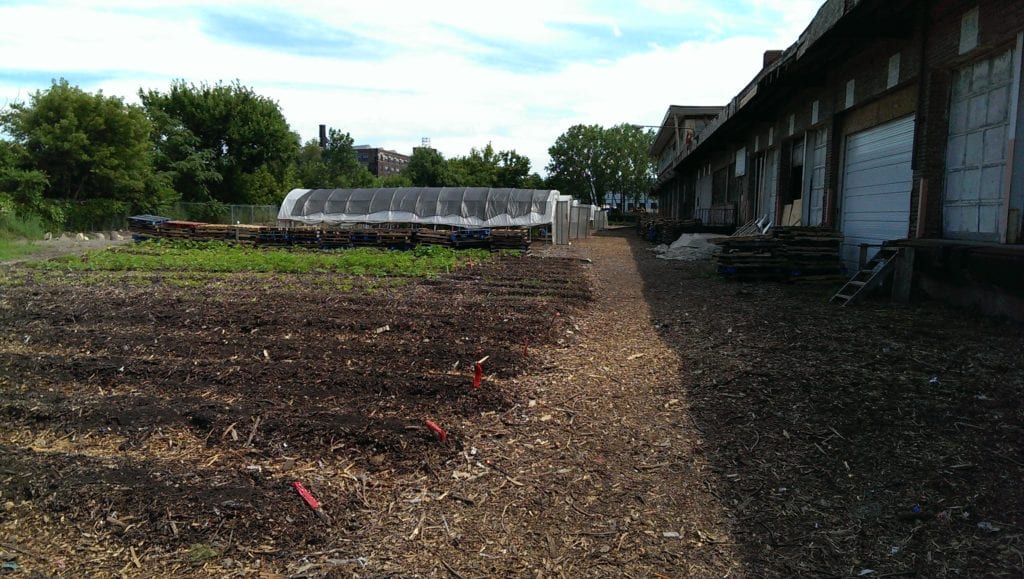 What I really took away from these experiences is that living sustainably in urban environments forces creativity and that’s pretty neat. I spent a few months in Central America on permaculture farms seeing different solutions to living more harmoniously with the land and how it applied to the landscape of tropical jungles. I was oblivious to the fact that this stuff happens right in our backyard in the middle of concrete jungles too and it’s awesome. The systems and designs in the city require a lot more creativity and it’s awesome to see that it’s already happening. The question I’m really interested in is how can we make this kind of thing more normal? How might we redesign the way our societies in urban and suburban environments function in an effort to really living from the land in harmony?