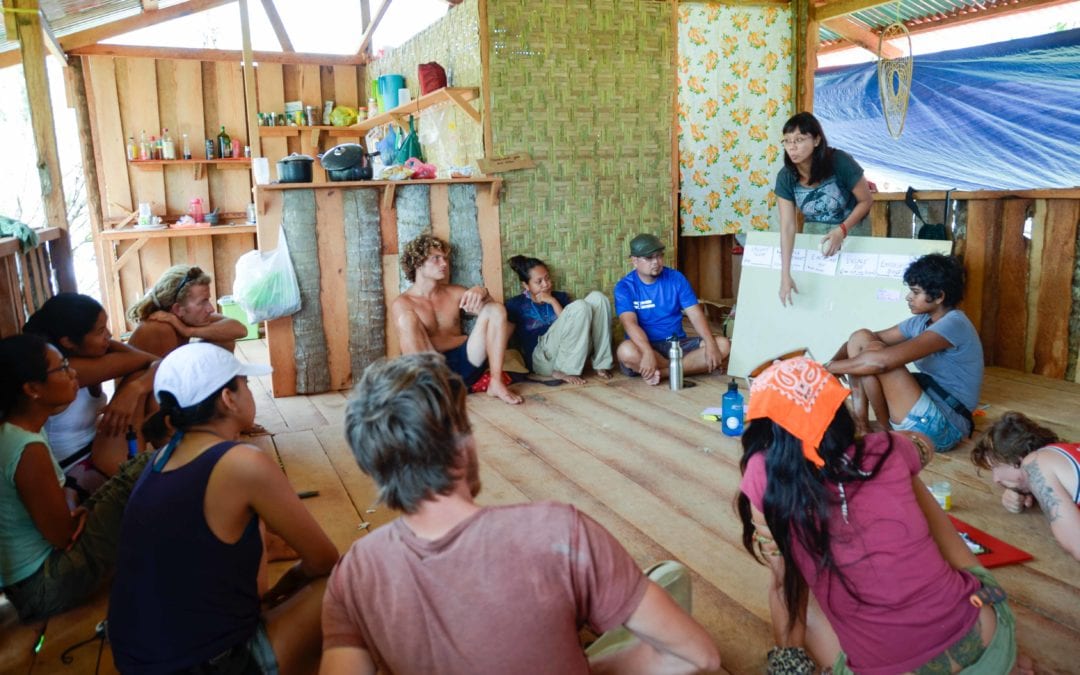 There was a tremendous amount of work that went into preparing for the Windship Build with Earthship Biotecture and The Earth Village Project. Earthship had done a similar humanitarian build in Malawi where they planned for 6 months in advance, yet they were still faced with many hurdles like running out of drinking water. This time, we had 6 weeks. It was mayhem and there were some tense times, yet everything worked out just as it was meant to be.

One of our main tasks was collecting tons of plastic bottles, glass bottles, aluminum cans, tires, earth, sand, gravel and rocks. Mia spearheaded these efforts setting up trash drives all over Tacloban where she’d take the local waste management crew on missions to pick up bottles and cans from local businesses and the junk yard.

For most of the locals, it was their first time outside of Batug and going to Tacloban was like the greatest adventure of their life. They were yelling off the back of the truck about how they’re going to the big city! Mia and Phil were even featured on local radio and television. Everyone knew Mia as the plastic woman in town. The waste management crew helped us find an abundance of building materials.

Back at base camp, Paul, Jake, Phil and Janis were building composting toilets, bucket shower facilities and the coco-mansion. Gigi was working with the community helping organize the Co-op that would provide the food, beverages and entertainment for everyone.

In Cebu, Sabina and I were running around town finding the rest of the tools and materials we were going to need for this Windship. Nestor Archivale, the city counselor of Cebu donated a pickup truck that we used to run around Cebu on a wild goose hunt searching for everything we’d need. We also made welcome packets for the incoming volunteers from abroad, and worked with Katrina to get the website up and running.

Once the build started and everyone was in Batug, we switched into a hospitality mode of sorts. Someone had to make sure the composting toilets were clean and that there’s enough toilet paper, we had to make sure the coco mansion was clean, we had to manage the food composting and waste. Each morning Mia would tirelessly wake up at 4:30am and make breakfast for everyone, oftentimes by herself. Each day, we had to make sure there was enough water for everyone to drink. We’d go down to the river with empty barrels and play the bucket chain game filling up the barrels and then filtering the water overnight. No one went thirsty. No one was specifically assigned to any of these tasks, but everyone took responsibility and stepped up to the occasion.

One fine night, someone had a little too much fun at the bar and shat all over the toilet seat and the floor of the toilet chamber. It was a shitty job, but it had to be done so Phil rolled up his sleeves and got cleaning.

I spent most of my time during the build behind the camera, trying to catch all the action; there was constantly something new happening. As much as I wanted to sledge tires and stack bottles in the Windship, I knew I had a responsibility to be the observer who relays this story to the world.

It’s easy to complain when something goes wrong. It’s easy to forget about everything that happens behind the scenes and all the effort that goes into starting something. The unseen get it done because they’re driven by themselves, intrinsically. Shadow workers don’t get the spotlight; they get shit done. It’s not the most glamorous job, but maybe the most important. Everyone deserves to be seen. I’m grateful for the shadow workers because without them, we’re nothing. Thanks!