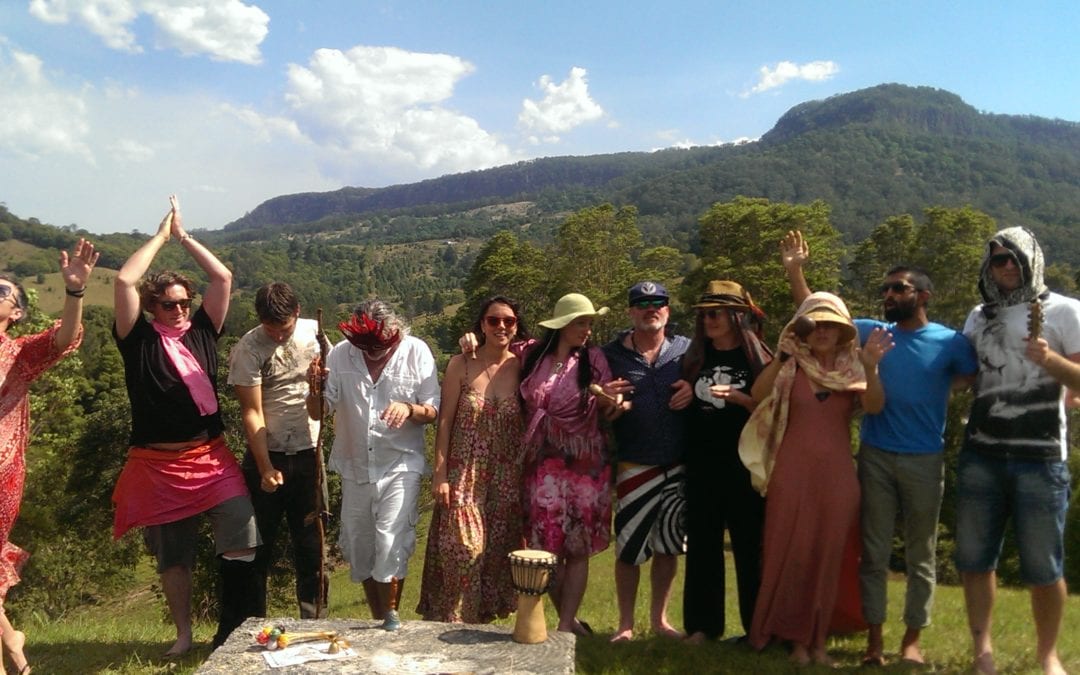 There were twelve of us in a circle in the middle of the room. Each was playing an instrument of some kind from little bells to bongo drums, making oral sounds and dancing around. It felt quite tribal and I didn’t really know what to make of this tuning as Dr. Gregg Lahood referred to it. Tuning was a central part of the relational co-inquiry workshop I participated in and I learned even though it might look odd, it’s a tool that can be used to inspire miracles.

Over the course of four days we learned a lot about one another as a group. Dr. G is a psychotherapist by training and this workshop was all about presenting a new model for communication, the charismatic and collaborative kind. My interest was in seeing what this was all about and I wondered how this might apply to my experiences working in groups and community building.

On the first day we all had a chance to sit in the ‘support chair’ and ask the group for support with anything over the next four days of the workshop. I thought about the first meetup of the Experience Institute and how I discovered that I need to learn to receive better in order to fully grow. So I asked the group to help me receive and this manifested itself in each person giving me a hug from the heart, it felt great.

Dr. G presented a few frameworks, models and maps he had developed to aide us over the course of the workshop, but the lion’s share of the focus was on learning experientially through activities like tuning and reflecting. There were two days of preparation and learning which led us to our launching statement of, “Does co-creating charismatic honey lead to a harmonious hive through collaborative enquiry and divine imaging?”

One of the activities we had done in the preparation period was spend 10 minutes outside making a communion with something in the natural environment. The workshop was set on top of a beautiful ridge nestled in between mountains so there was much to commune with. I made a connection with all flying things around me. There was no spoken communication, just a strong intention and energy that I put out in connecting with these flying critters. I felt myself longing to fly and join their pack, more and more flying things kept appearing out of nowhere and it was clear that a deep connection had been established via my charismaticness. Simple focused attention and intentionality is much more powerful than I realized. When we came back and reflected, everyone in the room resonated with this activity and had powerful experiences to share. As such, our launching statement was informed by the plight of the bees and I took it as a metaphor for avenging the world. Our tuning sessions thereafter were focused with an intentionality around bees. bzzzzzzzz

The third day we had done a fair deal of tuning by now and I was really getting into it. As a group, I felt like we were getting closer to communicating in a universal language without words, our tunings were more in sync, the emotions and visions shared when reflecting about each tuning were becoming more vivid and intense, the sense of well-being for the world was at an elevated state and I sensed each of us in the room was feeling more comfortable in our own skin. The light and beauty in everyone’s personalities was coming out to play. I had made a comment after one of the tunings that I felt like I had wanted more, like I wanted to yell from the mountaintops as I do sometimes when I’m traveling in remote places.

On the third day after lunch, something remarkable happened. We had a solid reflection and 2 part tuning session in the morning and the energy in the room was heavy with post lunch sit back and relax mood. Dr. G commented that he doesn’t really know where we should go from here, so there was some discussion around what we should do. I mentioned I’d like to do another tuning session and G suggested that I get up in the middle of the room and yell and maybe this would energize the group and lead us into another tuning session outside. He asked me if I wanted to yell anything in particular encouraging me to let it out if it comes up. The group wasn’t particularly keen on yelling themselves as most people felt they didn’t really have a yell in them, but they remained supportive of me. It was a big risk that required utmost dis-inhibition on my part with the very real possibility of embarrassing failure. I took a leap into the deep end.

Everyone had an instrument they were quietly playing as I stood in the middle of the room yelling “AHHHH!!!” at the top of my lungs circling around. Other members of the group started joining in spontaneously, the musical sounds were getting louder and I started yelling out this spiel that there’s still hope for humanity and every problem is an opportunity. “OPPORTUNITY!!!” The intensity continued to build and the energy in the room had completely transformed by this point.

We took the party outside to yonder rock looking out at the mountains and naturally formed a circle around the rock. A jubilant tuning festival ensued where each person in the group took a turn on the rock yelling. It was this beautiful celebration of the bees, an honoring of each individual, a release from deep inside and each person was fully on the boat. I felt like Captain Planet and The Avengers had teamed up to save the world and it was as if we had created a communion with every single beehive on the planet.

After the tuning naturally subsided we came back to the room and everyone was glowing. There was a sparkle in each person’s eyes that I’ve only seen a few times before in my life and there was a sense that the bees were safe for today. We all felt so full and satisfied that we left early that day and skipped the closing check-in. I realized that people can indeed perform miracles. Each and every person in that room performed a miracle that day and I had the esteemed privilege of being in middle of it and receiving these miracles. On the first day I had asked the group to help me receive. They delivered beyond all expectations; they taught me how to receive miracles. There is undeniable magic that is created when a group of people feel mutually responsible for something meaningful that is bigger than themselves. The sum of the parts becomes greater than the whole.

Thanks universe, nice one!

Can you remember the last time you experienced a miracle?