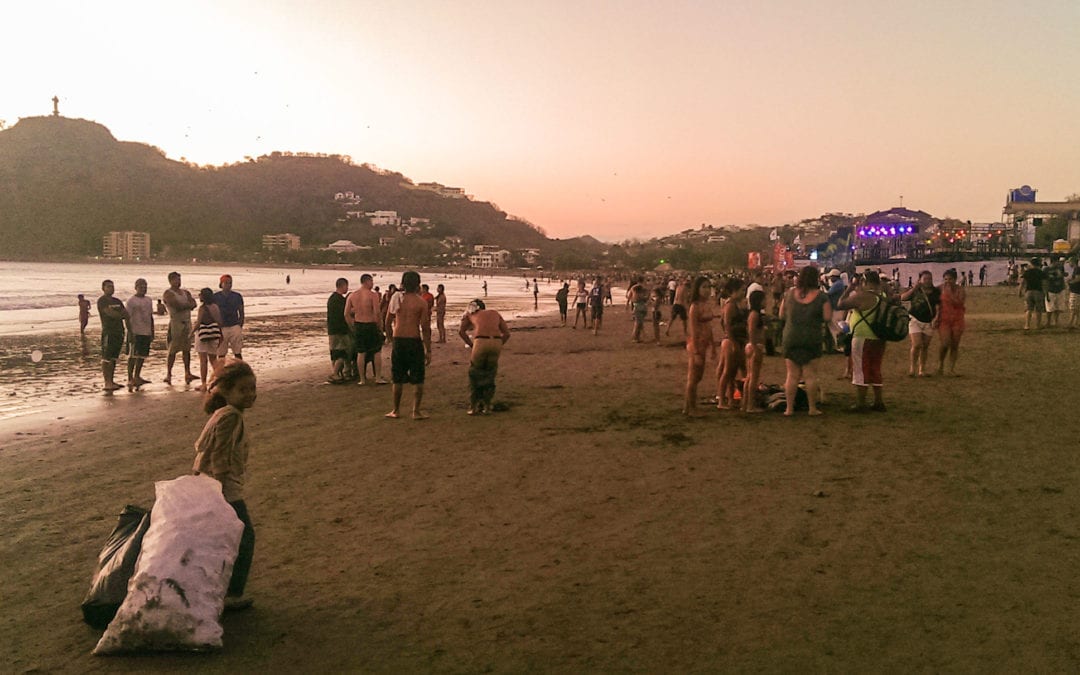 I stood on the beach admiring the sun’s descent over the horizon, as I do every day. Another beautiful sunset. This day was different though. I had trouble keeping my gaze on the oranges and reds, I was drawn to all the Semana Santa action. All along the beach, there were stages, a climbing wall, bumping sound systems, families, couples, partygoers and people who came here to rob drunken people. Semana Santa translates to ‘Holy Week;’ it’s the biggest celebration in Nicaragua all year leading up to Easter Sunday. Tens of thousands of people from all Nicaragua converge on San Juan Del Sur during this week.

A little girl walked in front of me. She’s beautiful. I’d peg her between five and seven years old. She rocked a hoodie that used to be white; it had been worn and stained into the color of muck. She turned around to readjust and we shared a glimpse. She bashfully smiled, fixing her hair and then looking off towards the crashing waves and the reflection of the falling sun over the water. She wanted to enjoy the sunset, just like me. I saw her eyes wonder about what’s out there, all the possibilities. Only for a moment though, she had a long way to go.

The bags were bigger than she was and she was dragging two of them. They were filled to the brim with plastic bottles and random trash. I watched her begin to walk off and I stood there wondering. What is this little girl doing here? Where are her parents? Why are her clothes so dirty? Did she eat today? Why is she collecting all this trash? Why don’t any of the thousands of people on the beach notice her? Does anyone even care? I had to follow her.

I was torn between walking up to her and asking her if she needed help or letting her be and uncovering answers by paying attention. I walked slowly, observing from a distance. No one seemed to be fazed by this little girl or what she was doing. Out of the thousands of people in the throngs, there was one person who turned their head to look.

Every once in a while she’d stop, readjust the bags. She’d reposition the loose bottles so they didn’t fall out. She’d look around and see everyone having fun and a big smile would overcome her face. She stopped by some people who threw a volleyball around, laughing hysterically. She stopped by some other kids who ran around throwing sand at each other. She just smiled. Her face showed no trace of envy. She was happy for the chance to be show up here. 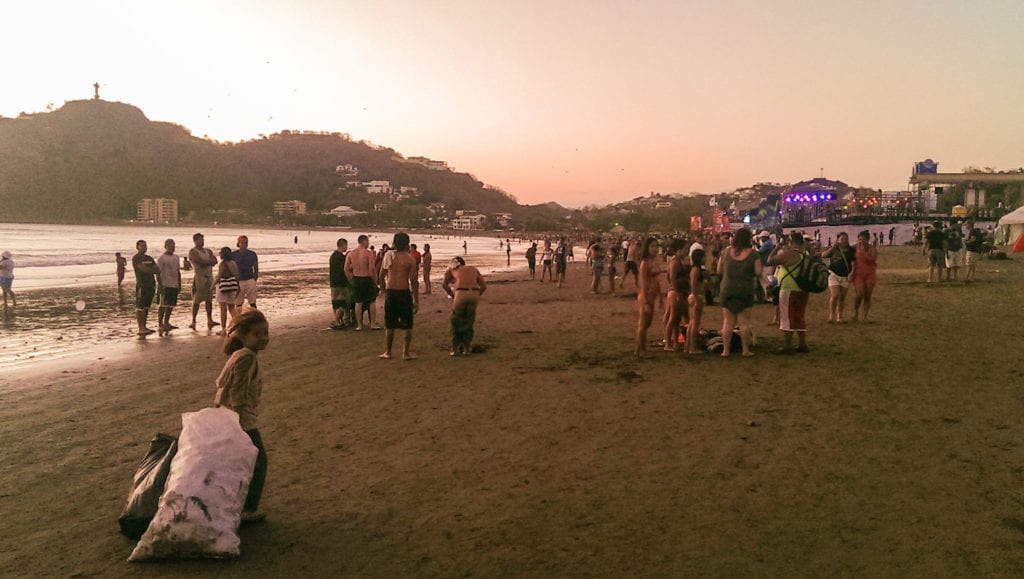 She kept walking and walking. Stopping every so often. One of the times she stopped, she turned around and we shared another glimpse. She looked longer at me this time into my eyes and she really smiled. Her gaze told me, “Don’t you worry about me, I’m happy! I’m going to earn money from these bottles and its so fun being with people having fun. I don’t need your pity or your handouts. Just smile.” She kept going.

We passed some boys that were little, but bigger than her. It was clear they knew each other from before. The little boy had a stick and he was teasing her with it by tapping the stick on her bags threatening to cast a hole. That would have been devastating. What if he actually punctured her bag and all the shit she picked up off the beach blew away? All of her hard work, gone, because boys will be boys.

She wasn’t going to take that shit though. She knelt down to grab some sand and threw it at him, with a smile on her face. The boys backed off and she moved onwards.

She’s grateful for this chance to be alive right now, right here. She’s happy about being in such a bustling place. She’s not worried about all the seemingly shit things about the whole picture. Perhaps, she doesn’t even see it that way. She’s not feeling sad for herself; she’s not victimizing herself. She’s doing what her life calls for right now and she’s doing it happily. That’s the kind of courage I aspire towards.

The nina walked on. After the bridge crossing, she walked away from the crowds, back towards the street. I wondered where she was going. I wanted to chase after her, go give her a hug and a hundred bucks. I froze though. She stopped me in my tracks, I couldn’t move. It was like she cast a freeze spell on me with the back of her head. All I could do was stand there and watch her blaze a new trail in the sand with her plastic bags. I watched her continue, until I couldn’t see her anymore. The freeze wore off and I started walking back the way we came.

She didn’t need me to give her a hug. She didn’t need anything from me, especially not money. She doesn’t need another handout. That nina is going to be just fine. She is resilient. Can you even imagine what it would be like to pick up all the rich people’s trash off the beach when you’re five years old because that’s just what you got to do? She’s more than inspiring, she is empowering.

When she looks back on this day, I hope she remembers her smile. I prey that she makes it home okay, wherever that might be. I hope she continues to foster her entrepreneurial spirit. I hope that girl keeps hustling. I know her resilience will pay dividends. I hope she doesn’t lose her sense of wonder. I hope that she remembers never to be ashamed of herself. I hope she keeps her spirit strong and nourished. I prey that society doesn’t corrupt her soul and brainwash her into believing she is second-class or oppressed. She is empowered already. I hope she doesn’t let the world’s chaos take herself out of herself. I hope she eats something tonight.