Don’t Get Suckered at the Farmers’ Market 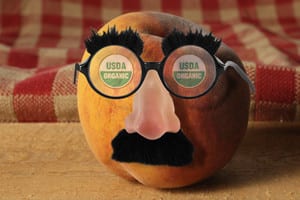 Image by CHOW.com
Post by Roxanne Webber via CHOW.com
Does produce at the farmers’ market really come from a local organic farm, or are the people selling it straight-up lying? That is the question NBC Los Angeles tried to answer in a recent exposé on farmers’ market vendors in Southern California. The conclusion: Not everything is all warm and fuzzy, sustainable, local, and organic in farmers’-marketville.
That said, here are some tips from Julie Cummins, the director of education at the Center for Urban Education About Sustainable Agriculture (CUESA) to ensure a vendor is legit and you aren’t being misled.
• Good signs: Cummins says to look for farms with real transparency. Some indicators that a vendor is the real deal include offering farm tours, having a produce stand at the farm itself, operating a CSA, holding farm dinners, and even blogging and posting photos of the farm.
• Bad signs: The main red flag is produce that is obviously out of season, says Cummins. Another possible sign of a faux farm is stickers on produce, because labeling is required for supermarket retail sale. However, some farms may label all of their produce.
• “Pesticide free.” Unlike stating that your product is organic, saying it’s pesticide-free is a claim not subject to any kind of third-party oversight. So it may be a lie. “People concerned about pesticide residues should look for certified organic produce,” says Cummins.
• If in doubt, ask questions.Examples: “Did your farm grow everything being sold at the stand?” “Is there anything you didn’t grow?” “Where is this grown?” “What is the harvest season?” Waffling or surliness on the part of the vendor may be a sign that not everything is as it seems.
• Every farmers’ market is not created equal. “The term farmers’ market means different things in different places,” says Cummins. Just because something calls itself a farmers’ market doesn’t mean it’s supplied by a bunch of mom-and-pop farmers. It may just be a produce mart. In California, you can check for certified farmers’ markets at cafarmersmarkets.com. In other places, try to find out who the market manager is and ask them which (if any) vendors grow their own produce.
For full story click here