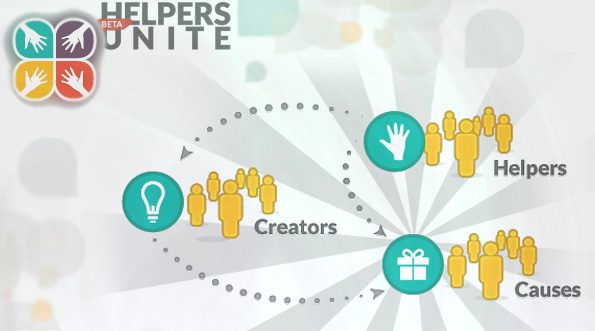 Earlier this month, we wrote about the power of crowdfunding and its potential to save the world. The post highlighted Rafael Correa, the President of Ecuador, and his clever, ambitious experiment to crowdfund the conservation of one of Ecuador’s most precious natural treasures, Yasuni National Park.
Correa decided to ask the global community to pay Ecuador $3.6 billion over the course of 10 years to stop him from drilling oil for some much needed cash. Miraculously, it worked. The world was willing to vote with their dollars and support Yasuni to the tune of $116 million (the goal thru 2011 was $100 million). This was a very targeted example of the massive positive potential of people pooling their money and resources to support causes far greater than themselves.
Keeping with this momentum, we just recently met with GoodWorldCreations to learn more about their creative and philanthropic brainchild, HelpersUnite – think of it as a “Kickstarter fueling good.” Like Kickstarter they’re funding some extraordinary projects, but what’s so exceptional about the HelpersUnite platform is that they’ve baked charity directly into their model. A small portion of raised funds goes directly to 501c3s and causes registered on the site.
What I find most moving about HelpersUnite is not just their commitment to charitable giving, but rather how their model challenges project fundees to consider the importance of giving from the very start. For too long, we’ve let philanthropy come second or even worse take a back seat. Once we become successful and the bank is full, then we give. But why can’t we do both at the same time? Why can’t we turn amazing ideas into projects that ultimately become successes while doing good all throughout the process?
HelpersUnite gives us enormous hope for the future of crowdfunding and its potential to move us in a more sustainable direction.