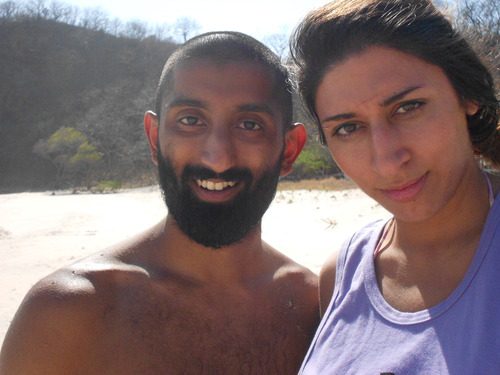 On April 5, 2013 I decided to rent a car because it was the only option in getting Nisha from the airport. There weren’t any more buses/shuttles coming into San Juan from Managua at the time of her flight and I’ve always wanted to really learn to drive stick.
I have tried it a few times before and understand the idea of it, I just haven’t really practiced it. I consulted the internet on how to drive a manual car and just went for it. Sure, I stalled five times before turning the first corner, but by the time I got to the airport four hours later I was feeling pretty good. Nisha’s flight was delayed and ironically enough she was hanging out in San Jose for a few hours extra, but she made it. It’s the best birthday present I’ve ever gotten, I’m so thankful I have such wonderful friends. I turned 25 that night, that’s a quarter of a century, kind of a long time. I know this is just the beginning though. Thank you so much Nisha for sharing that experience with me.

The next day we decided to keep the car since she was only going to be hanging around for a few days and it would be much easier to move around. We went up to some beaches North of San Jua Del Sur to Playa Maderas and Manajagual with no agenda, just hanging out, playing in the ocean, doing some yoga and a whole lot of just being. We got to Maderas as the tide was coming in and we watched all the surfers ripping it as we waited for some seafood grub. I knew I was going to be back though so wasn’t so ancy about being out trying to catch a wave. I loved just watching and being there.

The next day we decided to go to Leon which is a city full of beautiful architecture and old cathedrals. We drove across the country with the intention of climbing up Cerro Negro, a giant sand mountain that you can run down and fall and not get hurt. Unfortunately, time didn’t permit for this adventure, but the town was still lovely. It’s really important to have a flexible plan and not be attached to it and I’m really glad Nisha and I were able to do that and still have a good time even though everything didn’t work out as expected.

We stayed in this really fascinating hostel that was actually a non profit that did all kinds of environmental and educational projects in the community and it was all funded through the hostel, SONATI. It’s a really cool model and I think it’s an earnest attempt at real sustainable tourism. I hope to learn from them during my stay in Nicaragua.
We stumbled across a beautiful playground full of kids and parents just having a gay ole time and sat there for a while observing sheer joy and happiness in the faces and eyes of all these little children rolling down the slide. We met a fascinating German guy that was there on this program with the German government doing social projects in Nicaragua. Real cool guy, we had dinner with him. He talked about how he wants to go into politics when he’s older and this is the best to learn about what the world really needs, to live it. Amen to that, I wish him luck in his journey.

We left early the next morning for our trek to Ometepe. We had heard great things about the place and even though it was back in the direction we started, we decided it would be worth it. The toughest part of the trip was backing our little yaris onto the ferry, trying to swerve around all the children, dogs and large men. I was satisfied I was able to do it without stalling the car. I love learning new things.
Once we got on the island we were driving around leisurely just going to whatever place called our attention. We stopped in at this shack on the side of the road and had some delicious food cooked over a wood burning stove. Then we went over to El Zopilote which is a permaculture farm and sustainable tourism place that I was considering volunteering at. I wanted to go check it out and see if it’s worth coming back for.

It was nice what they were doing, but all I could think about was Rancho Margot and how much holistic their approach was and how the Ranch’s system was a much better example. I always knew the Ranch was unique, and after leaving I realize just how unique and special it really is.
Precious daylight hours were winding down so we decided to drive back to the little pueblo we saw on the way to look for a hostel to spend the night. We were talking about how we could make best use of the hour or so we had remaining in the day and I saw Chelsea and Melissa (friends and former volunteers from the Ranch) walking down the road. I yelled out the window “Hola chica lindas!” and it was insane. What are the odds? I knew they were traveling around in Nicaragua and we had a loose plan to meet up that didn’t pan out due to lack of internet connectivity. And we see them just strolling down the road on this island in the middle of a giant lake in between the volcanoes of Nicaragua. There are hundreds and hundreds of decisions an individual makes each and every day and if a single one of those decisions would have been different that day, like if Nisha and I had decided to walk 70 meters down the road to the other restaurant, or if Chelsea and Melissa decided to walk back to the hostel on the beach; we would have completely missed each other. A little further down the road was Will and Jess and then we met up with Tom at the hostel he’s volunteering at and saw Lindsey there as well. Even crazier, the Canadian couple I met on the bus to Nicaragua was staying at this hostel too! There are no coincidences, the universe was conspiring to bring us all together that night. The relationships I developed with these people at Rancho Margot over the last month were so powerful, I felt like I had been reunited with my family again and I’m so happy Nisha got to meet everyone and feel a glimpse of my life there.
That night we had a giant fogata (bonfire) on the beach, went swimming in the dark and laughed so hard my stomach hurt. It was perfect. It’s amazing how the world works when you just let it.
The next morning, we left with a full car to catch the 6am ferry. We dropped Will off in Rivas so he could catch a bus going back to Rancho Margot and we dropped off Melissa and Jess in Granada where they were going to catch a bus back to San Jose, concluding their trip in Central America. Nisha and I decided to stop into Cafe de las Sonrisas for a quick coffee before we drove into Managua. The cafe was staffed completely by deaf people and there were little cards on the table showing you how to order in sign language. They also made hammocks there and it was home to the largest hammock in Nicaragua. It’s so refreshing to see social enterprise happening here and it gives me a lot of energy and enthusiasm for what’s possible.
I tend to avoid visiting big cities in developing countries because they’re not all that interesting for me. Nisha is really into cities and she wanted to see Managua so I was excited to go drive around and see what it’s all about, understand why everyone says to stay away from there. We were driving around looking for a central business district or a central square or something with buildings and lots of people, but it turns out that it doesn’t exist. We found a big park where there were some really old structures, one was a museum and got some street food from a guy walking around the park. The time had come though, and we left for the airport. I dropped Nisha off and headed back to the beach to return the car.
Traveling with Nisha was great. I thought a lot about understanding the history and context behind my own personality and how it influences my behavior. It’s an excellent awareness tool. I know it’s easier said than done, but I know I can consciously chose to be whoever I want to be whenever I want.