A deeper cleaning of the lecheria 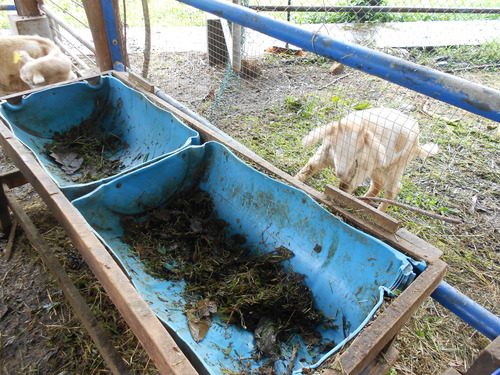 The morning began with clearing away of old pasto (grass) in the goat pen and replenishing it with fresh food. I find it very intriguing that the goats like to urinate and defecate in their food. There’s another tub there for waste, but for one reason or another they just like going in the food. Maybe it’s kind of like how you always find the best food in the dirtiest, dingiest little hole in the wall places? It still baffles me, but nonetheless a very interesting occurrence.

Then I proceeded to clean out the lecheria, shoveling poop and getting into the drill. This task has become very normal to me now and I actually enjoy it. I always think about how amazing it is that we’re making this extremely valuable compost that is used in the gardens to grow rich food and even used to heat water for guests and it all starts out as giant piles of shit.

Today’s cleaning of the lecheria was special though. There is a deep drain that runs through the lecheria to catch urine and more liquidy poop. All of this contents drains down the hill into the biodigester where the methane gas coming from this ‘waste’ is used to fuel the gas that goes into the stove burners in the kitchen. Every few weeks though, these drains fill up and get clogged from having too much solid stuff inside and they must be cleaned.
So, Tom and I lifted up all of the grates and got inside, literally knee-deep in cow shit cocktail to clean it all up. Tom had done this before so he had a nice system of getting it done. We tried to separate solid from liquid so the liquid could all just flow down into the biodigester for kitchen gas. He would shovel the more or less solid stuff into a wheelbarrow and I would take the full wheelbarrows to the compost pile. We had two wheelbarrows going though so that Tom could just keep shoveling and I’d come back making a circle bringing the empty wheelbarrow back so I could take the next full one. Tom shovels shit like a champ.

Once we cleared out all of the solid stuff, then we’d start on one end of the lecheria inside the drain and just push the rest of the liquid down the length of the building so it could drain down the hill. It was dirty work, to say the least, but we felt like we really earned our lunches today. Once we were done cleaning everything, I asked Beto to take a photo of us because I was so proud of how clean we got it. It was the first time Beto had ever held a camera.

The other fascinating thing that happened this morning was that the cows on the other side of the lecheria stayed there today, they were not taken out. Cows eat like it’s their job, that is what they do all day long. As such, each day they are taken outside the lecheria to graze the fields and eat. When they’re in the lecheria, food is brought to them, mostly pasto (grass) and some other special treats like banano, everything comes from other plants on the ranch.
I’m not sure if I completely comprehend what happened today, but from what I gather it is very important to manage where the cows are grazing so they do not overgraze fields and I think some fields were in risk of this so they opted to keep the cows out of the rain today and brought food to them instead. They were getting quite rambunctious though with their yelps and moos when they didn’t have food right when they wanted, it was a fascinating sight to see and hear, a little scary.

The afternoon was a little more relaxed, working in the huerta (vegetable garden) pulling weeds with a few other volunteers. It is a tedious task, but the time passes really quickly hanging out with good company in the garden.
After work, I went to yoga and decided I wanted to go take a swim in the river today. The water is very cold and it’s been raining for the last three days so no one else joined. It was invigorating though. I didn’t even feel so cold going in; I knew I was going to do it and I had already accepted the fact that it was going to be cold so I guess it didn’t really register. Once I got out, I could feel the blood rushing through my body and I actually felt warm. It’s amazing how well our body works for us.